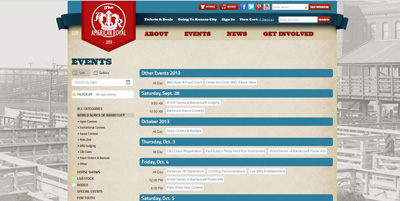 Usually held in late September and early October, The American Royal World Series of Barbecue is the proving grounds for amateur and professional pitmasters. This is the largest barbecue contest in the World! The American Royal is held in Kansas City’s “Stockyards District” and is huge – the event covers over 20 acres! This year, the main invitational event, The 34th Annual American Royal World Series of Barbecue KC Masterpiece Invitational, will feature over 100 Champion Teams from all over the US competing in four different meat categories – chicken, ribs, pork and brisket – and the Grand Champion title (last year, Big Poppa Smokers took the Invitational Grand Champion title). There is a total announced prize pool of over $31,000.00 for the Invitational, so each and every team is showing up to win! They have their eyes not only on the Grand Champion title but also titles in each category.

Along with The KC Masterpiece Invitational, The American Royal hosts Joe’s Kansas City Open Contest. There are over 500 entrants in this event and there is always plenty of action (along with some absolutely incredible barbecue)! The Grand Champion of Joe’s Kansas City Open Contest will be awarded $12,500.00 and a lifetime of fame. These two “feature events” aren’t the only things happening at The American Royal. There are several other events and contests that each provide an extremely fun and distinctive way for just about everyone to get involved.

Some highlights of The American Royal include a Certified Kansas City Barbecue Society judging class where anyone who meets the guidelines and requirements can take the four hour class to become a certified KCBS judge. Those that show up at The American Royal to focus on fun can take in the petting zoo, watch the rodeo, observe some of the finest horse shows, listen to world class live music, catch the evening fireworks or shop at the BBQ Marketplace and BBQ Sauce Store. There really is something for everyone at The American Royal and many have said that they come specifically for the Marketplace and Sauce Store!

There is so much to do, to see and to compete in at The American Royal that this article can barely even begin to explain the importance and entertainment value of the event. With The KC Masterpiece Invitational and Joe’s Kansas City Open, The American Royal has firmly established itself as the single most meaningful and decisive barbecue competition anywhere. The World Series of Barbecue is simply something that anyone and everyone should add to their bucket list so that they can say that were part of The Greatest Barbecue Event and The Greatest Barbecue Competition in the World!